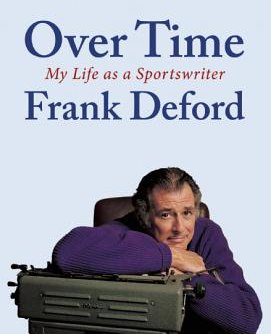 Frank Deford is a great storyteller and one of America’s best-ever sportswriters. I have enjoyed his work in Sports Illustrated and other publications, and I’m a regular listener of his weekly commentary for NPR’s “Morning Edition.” His new book, “Over Time” is a memoir about his career and the many fascinating sports personalities he’s covered. I was so entertained by reading it that I invited him to share some of his stories with me this morning on KTRS/St. Louis, and before I knew it, amidst a background of wind, sirens, and a barking dog, we had talked for over half an hour.

Among the topics we covered: