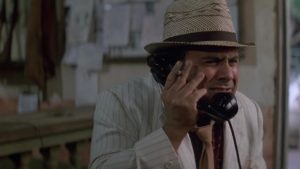 Until I came across “Romancing The Stone” on TV the other night, I’d forgotten what an amazing comic actor Danny DeVito is. He steals every scene he’s in.

The KMBC-TV headline reads: “Health officials confirm first probable case of monkeypox virus in Missouri.” No, no, no. You can’t have “confirm” & “probable” simultaneously. You mean “officials suspect.” Coincidentally, the first symptom of monkeypox is bad grammar.

We recently binge-watched “The Night Sky” on Prime Video solely because it stars Sissy Spacek and J.K. Simmons. But after finishing its eight episodes, we wish we could have those eight hours back. Meh.

I just had a prescription refilled, and the label on the bottle tells me it contains 00090 pills. That’s the way it’s printed, with five digits, which seems like a bit much. Or is someone getting a delivery of more than 10,000 pills at a time?