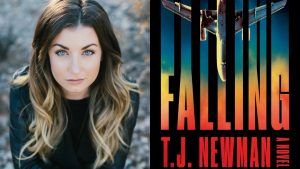 I don’t read a lot of fiction, but I really enjoyed the novel “Falling,” by TJ Newman. She’s an ex-flight attendant who wrote the thriller on cocktail napkins while passengers slept on red-eye transatlantic flights. The basic plot is that terrorists force a pilot into an impossible choice: he must crash his plane (with 140 people onboard) into an unidentified target or they’ll kill his wife and young children, who are being held hostage at home and strapped into vests full of explosives. The book is an obvious choice for a movie and, sure enough, 14 different studios, networks, and streamers bid for the rights, which were won by Universal. No word on when an adaptation might make it to screens, but meanwhile, Newman’s publisher, Simon and Schuster, quickly signed her to write at least one sequel, too. Pretty good for a first-time author.

At the poker table a few nights ago, a guy was spewing nonsense about vaccines and tried to bolster his argument by claiming the pharmaceutical companies aren’t worth our trust. He asked, “Do you know that the companies that make these vaccines have made billions of dollars from them?” To which I responded, “Good! I’m sure the people who make brakes for cars have made a lot of money, too, but that’s not a reason to let your kids get into a car without brakes!” By the way, the loudmouth in question later admitted he was fully vaccinated — including a booster shot. In fact, he said he’d gotten the jabs on the first day they were available. So, why the whining?

Last night’s Steelers-Seahawks game proved the value of networks having ex-NFL referees as rules experts during games. They offer great insight into why game and replay officials rule one way or another, but too often the announcers offer their analysis instead of letting us hear from the pros who know the rulebook inside and out. Cris Collinsworth, Tony Romo, and their fellow ex-jock analysts are good at explaining strategy, quarterback reads, and “cover two.” But they’re not as capable as Terry McAulay and the other former officials when it comes to the minutia that goes into referees’ decisions. I just wish all the networks would let them do it more often.

Yesterday, I accidentally dropped a bag of rice into some water. Fortunately, I was able to dry it off by pouring it into a bowl full of iPhones.