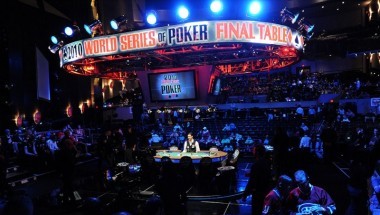 This week on my Final Table poker radio show, Dennis Phillips and I talked about the finale of the 2010 World Series Of Poker Main Event, which played out this weekend at the Rio in Las Vegas, as the November Nine was whittled down to this year’s champion, Jonathan Duhamel. Since Dennis was there, he offered some first-person observations of the heads-up resolution of the second-largest poker tournament ever, which started with 7,319 players, as well as the Poker Hall Of Fame inductions of Eric Seidel and Dan Harrington.

We were joined by Michael “The Grinder” Mizrachi, who finished 5th to bookend a remarkable WSOP that began with him winning the $50,000 buy-in Player’s Championship and boosted his career tournament earnings into poker’s all-time top ten.

Grinder was very candid in talking about some of the hands he played, including a call with ace-eight when his friend John Racener (who was short-stacked at the time but went on to finish 2nd) moved all-in with ace-king, and another hand where Mizrachi shoved with a pair of threes and got called by Duhamel (also short-stacked at the time) with ace-nine. Grinder lost both of those hands, but also had some big winners, including an unbelievable turn of the cards that knocked out Matthew Jarvis in 8th place. We also discussed the way Joseph Cheong seemed to blow up when it came down to the final three by getting involved with Duhamel in the biggest pot in WSOP history, which crippled Cheong and led to his elimination in 3rd place.