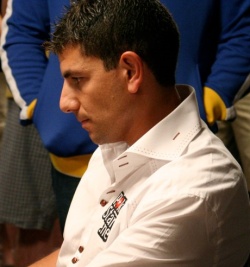 This week on my Final Table poker radio show, Dennis Phillips and I talked about the November Nine, the last men standing in the World Series Of Poker Main Event, who will return to the table this weekend to play down to the winner, who will get around $9 million. Since Dennis was part of the original November Nine in 2008, he gave some perspective on what the players have to endure this week before the cards are in the air, while I provided details on you can follow the final table action online.

Our guest, Brandon Steven, just missed being part of this year’s November Nine. He’s the Wichita car dealer who was knocked out of the Main Event in 10th place. Although he earned more than $600,000 for his deep run, he explained why he still hasn’t gotten over it. We also discussed what it was like in those nearly six hours before he got knocked out, went over some big hands he played, and analyzed which of the November Nine has the best chance of winning it all (and who will likely be the first one eliminated). Brandon will be hosting his fifth annual charity poker tournament this weekend to raise money for the Genesis Foundation — an event Dennis will take part in, along with two other Team PokerStars Pros, Joe Cada and Victor Ramdin.