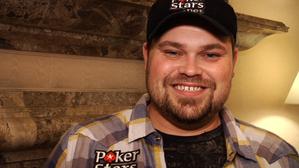 This week on the Final Table radio show, Dennis Phillips and I talked with Jason Senti, the short stack of this year’s WSOP Main Event November Nine.

We talked about how he played to stay alive when there ten players left, including folding a big over-pair that he’s sure he’ll be mocked for when it airs on ESPN (their coverage of the Main Event begins this evening and continues every week until Senti and the others play their final table in November).

Dennis and I also discussed: