Today on my poker radio show, The Final Table, Dennis Phillips and I talked with Jack Effel, Tournament Director of the World Series Of Poker, about the schedule for next summer’s tournaments, from the $1,000 buy-ins to the $10,000 Main Event to the $50,000 Player’s Championship. We were especially curious about how Jack and his WSOP colleagues will avoid the problem that arose this summer, when several hundred more people than the Rio could handle wanted to play on Day 1D but were turned away. 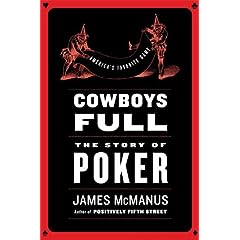 Then we talked with Jim McManus about his comprehensive new book, “Cowboys Full: The Story of Poker.” Among the topics included in our conversation: