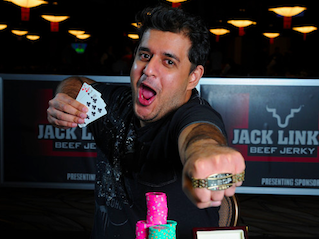 Today on the Final Table, with the World Series Of Poker just days away, Dennis revealed his involvement in the company that will take photos of every player in every event at the Rio and make them immediately available for purchase. Look for their kiosk every day you play there!

In our news segment, we discussed why the number of entrants at the WPT Championship is at a five-year low while other live tournaments (like the WSOP Circuit Event in New Orleans this weekend) are drawing bigger fields than ever. We also discussed the Hollywood celebs who chose to settle a lawsuit over their poker winnings rather than go to court, whether an official White House response to an online poker petition will have any affect on the chances of legalizing it federally this year, and why you should add Illinois to the list of states considering online poker legislation.

In our guest segment, we talked with Owais Ahmed, a mixed-games specialist who won his first WSOP bracelet last summer in the $2,500 Limit Omaha/Stud 8-Or-Better event, as well as finishing fourth in the $50,000 Poker Players Championship. He explained how he overcame a big chip deficit to beat Michael Mizrachi heads-up to win that bracelet and why he’s happy this year’s Poker Players Championship won’t be televised. We also asked him about playing an All In Or Fold tournament earlier this year at the LA Poker Classic, why he enjoys doing commentary on Live At The Bike webcasts, and why he prefers the small fields that show up for mixed-game tournaments as opposed to the big no-limit hold’em events.