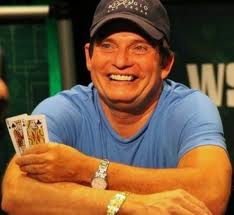 Today on the Final Table, we talked about Dennis’ weekend trip to the Chad Brown Charity Event at Choctaw Casino in Oklahoma and the strategy behind his play on the bubble (at the point where one more player will be eliminated before everyone remaining makes any money). We also discussed the newest developments in the Full Tilt Poker saga, including a report that Laurent Tapie offered to hire all of its parent company’s employees in an effort to launch a new poker site later this year. And we discussed a newly posted interview with Howard Lederer, in which he explains why “honesty is the best hustle.”

In our guest segment, we welcomed Sam Barnhart to the show. Sam had an amazing 2011 — he entered a super satellite that put him into the WSOP Circuit Main Event at Harrah’s Tunica, which he won, earning a spot in the WSOP Circuit National Championship at Caesar’s Palace, which he also won. To top it off, he made a deep run in the WSOP Main Event, finishing 17th and bringing his tournament earnings for the year to over $800,000. We asked Sam about his life since then, what he learned from playing all those years in Mississippi, and his advice for anyone who wants to follow in his footsteps (including Main Event rookies like me).