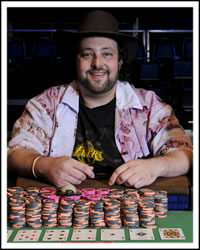 This week on The Final Table, we had a real Dog and Pony show, with stories from a WSOP Circuit Event at a Florida dog track and a HORSE champion as guest.

I started by recapping my weekend at the Palm Beach Kennel Club, where they had a huge sellout of Event 1 (and a near-riot of players trying to enter) which created the largest prize pool for a WSOPC preliminary event ever, and history was also made in another tournament when women took the top three spots for the first time. We also analyzed a hand I witnessed in one of the pot-limit Omaha cash games on Sunday.

In our guest segment, we talked to mixed-games specialist David Bach, who just won his second Aussie Millions ring in a $2500 HORSE event to go with the bracelet he won in the $50,000 HORSE championship at the 2009 World Series Of Poker. He explained the difference in strategies between those limit games and no-limit hold’em. We also discussed his recent blog post about how TV coverage can have a negative impact on tournament play, a famous hand he played against Vanessa Rousso in the 2011 WSOP Main Event, and his reaction to Daniel Negreanu’s comments about Full Tilt board members Ray Bitar, Howard Lederer, and Chris Ferguson.

In our news segment, we discussed Jason Somerville’s coming out announcement, the return of Jonathan Duhamel’s 2010 Main Event bracelet, and why an Illinois prosecutor decided not to file charges against the players in a small-stakes home tournament.