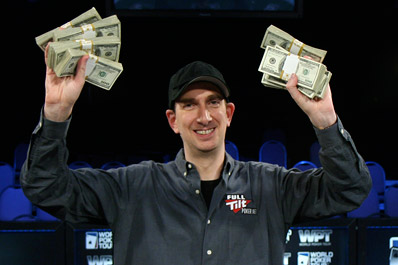 Today on my Final Table radio show, we talked with Erik Seidel, one of the most successful poker players of all time, with 8 WSOP bracelets, 1 WPT title, and over $13 million in tournament winnings — $3.4 million of that last month alone!

We talked with Erik about the super-high-roller tournament he just won in Australia (with a buy-in of $250,000), from how it came together to how he rallied back from a huge chip disadvantage to beat Sam Trickett heads-up. He also reminisced about his early days at the Mayfair Club in New York, where he and other poker legends like Howard Lederer, Dan Harrington, and Steve Zolotow, played and learned from each other. Erik responded to several questions from listeners, including whether he thinks anyone over 35 can win the World Series Of Poker Main Event now, considering the crop of extremely talented young players in the field, as well as some strategy questions about what to do when you’re in a slump.

Speaking of strategy, Dennis explained how, in a recent $1,000 buy-in deep-stack tournament at the Venetian, where he was below chip average from the very first round, he managed his stack well enough to finish 11th in a field of over a hundred. We also touched on Peter Eastgate’s announcement that he’s returning to poker, and plugged that Greg Raymer will be here in St. Louis for the WSOP Circuit Event in April, where he’ll conduct one of his Fossilman Poker Training clinics (more details on that next month).