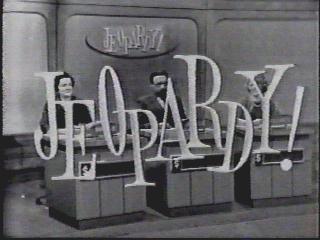 Despite Alex Trebek and the current producers celebrating its 30th anniversary this season, “Jeopardy!” actually debuted 50 years ago today. Mental Floss has a good history of the show here.

I’ve been a fan of the show since I was a kid, when my mother appeared as a contestant in 1967 with Art Fleming as host and Don Pardo announcing. Unfortunately, there was no technology available at the time that would have allowed us to record the shows and save them for posterity, and NBC didn’t save the old tapes. The show then aired in the middle of the day, so I would have missed it while at elementary school, but luckily, NBC broadcast her episodes in the week that we had a school vacation, so my brother and I could sit with her in amazement in front of our black-and-white TV as Mom kept coming up with correct questions and knocking off competitors.

She lasted four days until being stumped by a Final Jeopardy answer she didn’t know: “T stands for this in Booker T. Washington’s name” (Correct question: “What is Taliafero?”). At the time, the value of the clues ranged from $10 to $100, compared to today, when the cheapest clue is worth $200. So, the nearly two thousand dollars Mom won in 1967 would be equivalent to $40,000 today (not counting inflation!).

Another difference is that in the original version of “Jeopardy,” contestants could ring in as soon as they knew the answer, rather than waiting for Fleming to finish reading the clue, as they must in the Trebek version. That meant you not only had to figure out the answer quickly, you had to be even faster on the button than today’s contestants.

The cash Mom won is long gone, as is the “Jeopardy” home game she received, but I think she still has the other prize, Compton’s Pictured Encyclopedia, on a shelf upstairs in my old bedroom. At the time, we needed an encyclopedia — a luxury we couldn’t afford — so my brother and I could “research” things for school (remember, there was no internet at the time). I’m fairly sure that many of the paragraphs composed by Compton’s writers ended up in essays I submitted to my elementary school teachers.

About 20 years ago, Jeopardy! producers rolled through town on a contestant search, where anyone who wanted to be on the show went to a hotel ballroom to take a quiz. I contacted them and asked if I could cover it as a member of the media, interviewing the crew and potential contestants. They gave me the okay, and allowed me to take the test, which was much harder than I expected. The clues were all from the $1600 and $2000 rows at the bottom of the Double Jeopardy! board. I got a little more than half right, not nearly enough to qualify for the top 10%, who were invited to stay for some mock game-play designed to let the producers see the personalities of the applicants.

It wasn’t enough to be fast and smart, you also had to be good on TV. Most of the people understood that and pumped up their energy, but I remember one guy named Joe who got upset whenever someone else rang in ahead of him even though he knew the answer. And that’s the difference between playing Jeopardy! at home and playing it in a competitive environment. At home, you shout out the answers and feel good about yourself. On the set, you may never get the chance if you’re up against someone with better buzzer timing.

My wife and I still record the show every day and binge-watch a few later. We play by the Fleming-era rules, shouting out the answers as soon as we know them. We’re pretty good, as long as the categories aren’t Shakespeare, Opera, or anything to do with religion (I shout out “Deuteronomy,” regardless of the context). We know we’re not in the same league as Arthur Chu, who recently racked up $300,000 in winnings and upset some people with his unorthodox jumping-around-the-board style (I thought he was terrific), but we do pretty well.

I’m also happy to have had the chance to interview Ken Jennings a few times. He’s always a pleasure to talk to, but despite being the game’s longest-running champion, he’s not my favorite Jeopardy! contestant of all time.

That will always be Mom.