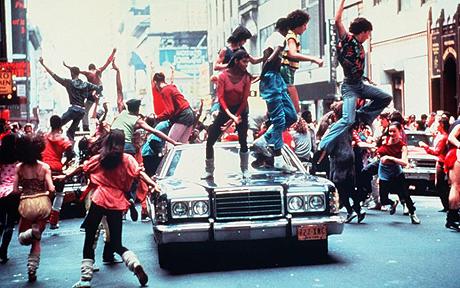 I showed my daughter the original “Fame” last night and was surprised to see it hold up thirty years later.

The movie had breakout performances by Irene Cara and Gene Anthony Ray, plus a wonderful cast of adults as teachers at the performing arts high school, led by Anne Meara as an English teacher who’s taken too many years of crap from students who expect academics to be an afterthought, Jim Moody as the drama teacher who wants the class to draw on their own experiences, and Albert Hague as the music teacher fighting a losing battle against synthesizers. Then there was that soundtrack, which won a couple of Academy Awards, and direction by Alan Parker (who a decade later made an even better musical, “The Commitments“)

My daughter’s reaction to the first hour, which shows the joy of performing and learning, was to wish that she’d gone to a fun high school like the one in “Fame.” But as the second hour revealed some of the downsides of show business life — from Coco’s encounter with a “director” who only wants to see her topless, to the former star actor who left for a career in California but returned to New York to wait tables — I saw that desire lessen. And she was mystified at how some of the students were even accepted to the performing arts high school, considering how bad their auditions were (in particular, the young woman who shows off her acting skill by recreating OJ Simpson waiting for an elevator in “The Towering Inferno”).

When Mel Brooks turned his classic movie “The Producers” into a Broadway musical, it worked. But when he made a movie out of the stage version, it stunk up the theater. There’s a remake of “Fame” in theaters now, but it can’t be as good, because Hollywood loves to “re-imagine” movies instead of understanding what made them work in the first place.

“Fame” has been a movie, a TV series, and a Broadway musical. There’s no reason to start the cycle again; once around the horn is enough. After all, the lyric is “Fame, I’m gonna live forever!” — not “Fame, I’m gonna be reincarnated when Hollywood can’t come up with an original idea!”