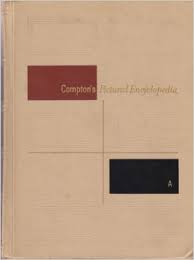 In my story of my mother’s appearance on “Jeopardy!” in its first decade, I mentioned that one of the things she won was Compton’s Pictured Encyclopedia, which became a valuable resource in our house. It was the the first encyclopedia my parents owned, even though my father had been a writer for Funk and Wagnall’s in the 1950s. He worked for a year on articles that started with one letter of the alphabet, thus filling one of the volumes of the encyclopedia. Unfortunately, when he was done with that letter, he was out of a job, and didn’t even get a copy of his volume, let alone the entire encyclopedia, as a parting gift.

The year Mom brought home Compton’s Pictured Encyclopedia was 1967, the last year “Pictured” was included in the name of that brand — which later became the first multimedia encyclopedia. Compton’s was absorbed by Britanica in 2002, but hasn’t been printed in book form since 2009.

In fact, very few print encyclopedias are still around since the advent of Wikipedia, but this weekend on NPR, there was a story about a German group called Pedia Press, which is trying to raise funds to print a current edition of Wikipedia. Considering its size, I think they’d have a better chance of getting the rights to the Encyclopedia Brown books.

To say this would be a massive project is an understatement.

One thousand volumes, 1,200 pages each — more than one million pages in all — about 80 meters of shelf space. That’s what it would take to make a printed version of Wikipedia. The idea is to let people see just how much information is in the online encyclopedia, says Christoph Kepper and his partners at Pediapress.

“Nowadays you just use Wikipedia every day without even thinking how large that might be … the English Wikipedia has 4.5 million articles,” Kepper says. “Nobody can imagine this number. It’s only when you see this in print or in a physical form that you realize how large it really is.”

Kepper and his partners are trying raise $50,000 through an Indiegogo campaign. Their plan is to exhibit the book at a Wikimania conference in London in August.

The full NPR story is here.