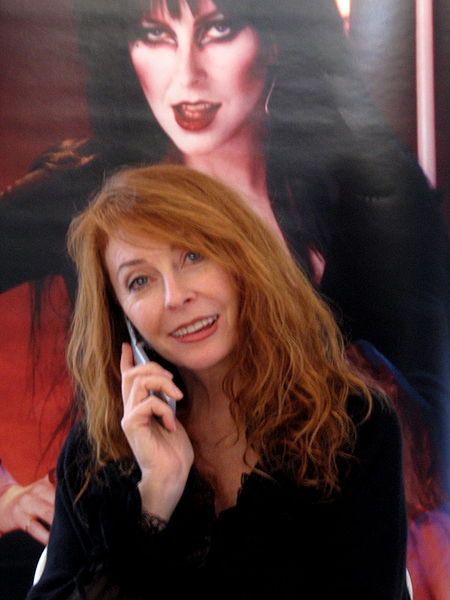 It’s hard to believe it’s been almost 30 years since Cassandra Peterson created the Elvira character for a local LA TV station. It wasn’t long before she had a national presence, and I remember her visiting my morning show on WHCN/Hartford sometime in the early 80s on a promotional tour.

She was only supposed to be there for a half-hour, but ended up staying nearly two hours because my listeners loved her and bombarded the station with phone calls. What they didn’t know was that while they were picturing Elvira in her black wig and tight-fitting dress, Peterson was actually sitting beside me as her real-life self, a redhead who was never noticed in public because she didn’t look anything like her character out of costume.

On the air as Elvira, she was a gifted improviser with a quick wit, willing to play along with anything I threw at her. Off the air as Cassandra, she was more than a pleasure to hang out with, bubbly and funny and candid. She clearly understood how she’d struck gold and how to exploit her sudden success.

Elvira ran pretty hot for a decade or so, with commercial endorsements, her own movie

, computer games, calendars, and tons of personal appearances to go along with her syndicated TV show. That fame began to wane in the 1990s, but she never completely disappeared. In fact, there’s been a steady stream of demand for Elvira, particularly around Halloween — so much so that, a few years ago, Peterson, who is nearing 60, hired a couple of actresses to impersonate Elvira around the country, making it possible for her character to be in more than one place at a time.