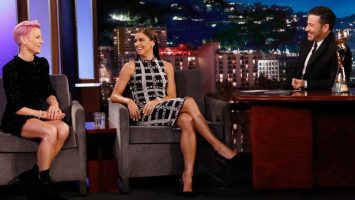 I no longer watch any of the late-night shows live. In fact, I haven’t paid much attention to them at all over the last few months.

But last night, I was in bed and couldn’t fall asleep, so I turned on Jimmy Kimmel, just as his show was starting. I was pleased to see that his guest lineup included people I was interested in: Jon Favreau, talking about the new version of “The Lion King” he’s produced and directed (my review will be up next Thursday, when the movie is officially released), and the duo of Alex Morgan and Megan Rapinoe of the US national soccer team that just won the Women’s World Cup.

Kimmel’s monologue was pretty funny and much tighter structurally than I remembered. After a three-minute commercial break, Favreau proved himself once again to be a money-in-the-bank guest, telling interesting stories about the technology behind his Disney remake and about working with the cast. Then came another three-minute commercial break, followed by Favreau showing a clip from the movie and discussing it some more.

I don’t care about soccer at all, and haven’t watched a minute of any World Cup game ever, but I was looking forward to seeing Rapinoe and Morgan, who would surely have some great anecdotes about the tournament they won, the equal pay controversy, the victory parade the day before in New York, and more.

Unfortunately, at that point in the show, ABC made me wait through eleven minutes of commercials and promos before Kimmel reappeared and brought them out.

Eleven minutes is an eternity in the broadcast world. Even before the on-demand immediacy of our current culture, any show that went away for that long must have had a technical problem. But that wasn’t the case here. It was simply a matter of the network loading up as many ad opportunities as possible, regardless of whether it made viewers tune away — which becomes even more of an issue in late-night, where you’re not only battling competing shows (which were all in reruns this week) but, even more so, the risk of those watching you falling asleep.

Of course, I could have done what I usually do, which is wait until the next day and watch the segment replay on YouTube, where I might have to sit through one thirty-second ad, but I fought the urge to nod off, stuck with it, and finally got to the champions. However, once they were done, so was I.

Except I couldn’t help thinking about those eleven minutes.

I flashed back to the first commercial radio station I worked for in 1978, WRCN/Long Island, an album-rocker that ran nine minutes of commercials an hour (three breaks of three minutes each). At one point, the station was doing so well that the general manager and sales manager wanted to capitalize on our success by adding another minute to the last break in every hour. Our program director, Don Brink, went to war with his management colleagues, claiming listeners wouldn’t sit through four straight minutes of commercials. Unfortunately, since the GM was also the owner, Don lost the battle.

But even those desperate money-grubbers would never dare suggest getting away from regular programming — in any format — for eleven minutes at a time. That’s insane.