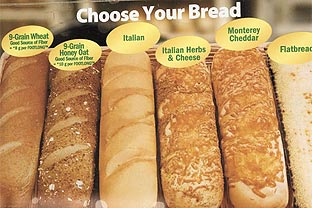 This column by Will Durst is reprinted with permission.

No matter who you are or where you live or what you drive or whether you thought The English Patient or Anchorman 2 the funnier movie, it is time to take a stand on plastic bread. Here’s a hint: most of us are against it. Formaldehyde rinsed coffee beans? Not big fans. Flame retardants in our cupcakes? That’s a big old negativo, Breaker One. And pink slime should be featured in horror films, not meat.

These heartfelt proclamations result from the wake of recent revelations that the Subway sandwich chain uses the chemical, azodicarbonamide, in its bread. Azodicarbonamide is an additive whose principle use lies in the production of plastic foam products like yoga mats and sneaker soles. Not quite what you’d expect from the company that grew to 41,000 stores by being the healthy alternative. Hey Jared, when did you guys change the motto to “Eat Fresh Plastic?”

This culinary confession has prompted reactions just a wee tad less hysterical than a carload of pre- school Catholic girls flying off a roller coaster into the pigpens of the Nevada State Fair. “SUBWAY BREAD IS SNEAKERS, PEOPLE. YOU’RE EATING SNEAKERS.”

Settle down folks. You can find all sorts of stuff in our food. Cellulose, which is wood fiber. Hormones. Rodent hairs. Metal shavings. Dwarf goat beard trimmings. What part of the chicken you think the McNugget comes from? And don’t forget that most omnipresent chemical of them all: the dreaded dihydrogen monoxide, often nicknamed… H2O.

Thing is, you take all the chemicals out of food, they’d be the wrong color, rot in 6 hours and that quarter-pounder would have to be marketed as a 2.5-ouncer. There’s only 2 ways to ensure your digestive tract is unsullied by tainted food. Grow your own or stop eating. The beauty of the latter is being able to fit into fashionably thin clothes. During that brief pre-dead period.

Both castoreum and azodicarbonamide are classified by the FDA as GRAS. Generally Recognized as Safe. Which seems a rather unexacting measurement where our children’s food is concerned. For years Rock Hudson was GR as straight. Pluto — GR as being a planet. Trickle down economics — GRABS.

This public relations nightmare couldn’t come at a worse time for Subway, whose foot long sandwiches were recently measured at 11 inches. Absent one angry inch. Or maybe the foot they’re referring to relates to the sneaker soles.

Rather than running away from the controversy, the sandwich maker needs to double down, by selling the American public (because they can’t use it in the bread of foreign countries) azodicarbonamide as a low-fat, self-cleansing miracle additive. “Subway: Home of the Shiny Clean Colon.”

Will Durst is an award-winning, nationally acclaimed political comic. Go to willdurst.com to find about more about his new CD, “Elect to Laugh” and calendar of personal appearances including his highly lauded one man show, “BoomeRaging: From LSD to OMG.”