E-Mail Of The Day 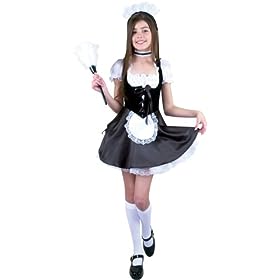 On my show, we’re talking about the completely inappropriate Halloween costumes that are on sale and targeted at girls my daughter’s age (13) and even younger. Some of them would be a better fit in a Victoria’s Secret store than in the “tweens” section of our local costume shop.

A 17-year-old named Lorraine just called and said that this trend started with the movie “Mean Girls” a few years ago. She admitted that she’ll be dressed up as a French maid tonight for her college boyfriend’s Halloween party, even though her high school peers told her she’s crazy to wear that in public.

Then there’s this e-mail from John:

I made the mistake of going with my 9 year old to get a costume. She originally wanted to be a Super Model for Halloween. When I convinced her that was stupid, I agreed to take her to the local Halloween store to find a better outfit.


I was surprised at the French maids and sexy outfits in the kids section. I noticed a Pirate outfit for girls similar to Johnny Depp’s character in Pirates of the Caribbean. I did not pay 100% attention to the costume next to it called “Wild Pirate” with fishnet stockings, low cut top and short skirt. She wanted it and I bought it (like an idiot) because I did not believe it would be that bad on my kid. Wrong!


My daughter modeled it for us and I think she was even aghast at the outfit. She was excited that the boys would think the outfit was cool. I had to stand there and see her childhood explode before my eyes. My wife, of course, used the opportunity to give her (and me) a stern lecture on what is appropriate for a nine year old girl.


We allowed her to keep the outfit, but she has to wear her black gymnastic leotard under it. And the fishnet gloves will not be worn to school.


My lesson: Supermodel dress and pancake makeup does not sound so bad.

One last point. When Lorraine mentioned “Mean Girls,” I said, “Oh, yeah, the Tina Fey movie, a good one.” I’m sure she was thinking, “Uh, you mean the Lindsay Lohan movie, grandpa!”