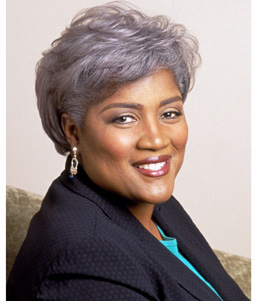 Today, I talked with Democratic strategist Donna Brazile about the Super Tuesday results, how much Hillary Clinton’s lack of money will affect her campaign, and whether John McCain’s success in the blue states will translate to votes in the fall.

I also told Brazile how I was disgusted by George F. Will’s comments last night on ABC — while sitting right next to her — when he said he was thankful for the “super delegates” (like her) who will offer some “adult supervision” of the nominating process. I’ve always considered Will to be a presumptious jerk, but here he was telling Americans that we’re not good enough to choose our own presidential candidates, that we need party insiders and back-roomers to do it for us. Brazile didn’t challenge Will on ABC, so I challenged her about it — and she agreed, saying her vote was no important than yours or mine.