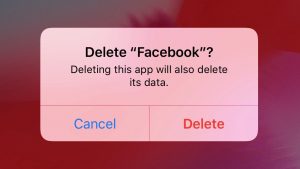 After considering it over the last couple of weeks, I have decided it’s time to delete my Facebook account. But first, I owe you an explanation.

My decision has nothing to do with the corporate name change to Meta. Rather, it’s about Facebook’s role as the number one spreader of disinformation worldwide. That’s different from misinformation, which can sometimes be attributed to mere mistakes. Disinformation, on the other hand, is the willful dissemination of purposely incorrect statements, memes, and stories in order to further an agenda — lies about the 2020 election, lies about the 1/6 insurrection, lies about the efficacy of vaccines, and pretty much every conspiracy theory ever conceived.

That’s nowhere near a comprehensive list of the evil Facebook has done. Tack on the free platform it offers for spreading hate, racism, anti-Semitism, white nationalism, and other forms of extremism. And the negative impact doing so has had on politics not just in the USA but around the world. And the harm Facebook and its subsidiaries continue do to the self-image of teenage girls.

Thanks to whistleblower Frances Haugen, we now know that not only does Facebook management refuse to purge incendiary garbage from the platform, it does the contrary, by programming its algorithms to push the most rage-inducing content to users. Anger and divisiveness make people spend more time on the service, and more likely to return to it multiple times each day.

In the radio business, we call those metrics “quarter-hour maintenance” and “cume,” the data upon which ad sales are based. But there’s no radio station or show or cable news outlet that matches Facebook’s capacity for promulgating unrest on a global basis. All without the company being held responsible for any of it.

I understand that deleting my Facebook account means thousands of people who follow me on the platform — including real-life friends and extended family members — will have to find me elsewhere, but that’s pretty easy. I’m still on Twitter (@paulharrisshow), and I’ve had my own website, HarrisOnline.com, for more than 20 years. It’s where you’ll find everything I’ve ever posted — more than 8,500 entries and counting. I continue to try to write something new for my site every weekday, and it’s not only yours to enjoy for free, but is completely devoid of advertising.

That’s another sore subject. For my entire professional career, I created content for radio, television, and print, knowing it would be surrounded by commercials and ads sold by the organizations I worked for. But in every case, some of the money taken in by those companies trickled down to me in the form of salary or freelance fees. Facebook upended that dynamic. What made Zuckerberg, his colleagues, and his shareholders so wealthy was the massive amount of content produced and posted by people around the world — including me — who were never compensated in any way while Facebook made billions from the ads that ran adjacent.

I understood and was willing to accept that deal for a while. But as my disgust with Facebook’s practices has grown, the sour taste in my mouth became so intense I couldn’t take it any more.

Therefore, unless the Zuckerbot algorithm boots me prematurely, I will permanently delete my Facebook account this Friday, November 5th. I’m not doing so immediately because I know a lot of people don’t check their newsfeed every day, and I want them to see this explanation.

If you’ve followed me there over the years, I hope from now on you’ll instead look for my rants, reviews, and random thoughts every day here on HarrisOnline.com.