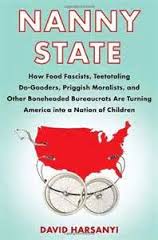 Today I talked with David Harsanyi about his book, “Nanny State: How Food Fascists, Teetotaling Do-Gooders, Priggish Moralists, and Other Boneheaded Bureaucrats Are Turning America into a Nation of Children,” in which he asks “when did we lose our right to be lazy, unhealthy, and politically incorrect?”

With mandatory seat belt laws, the FCC over-regulating content, and bans on everything from smoking at home to dodgeball at school, Harsanyi wishes the government would do less. But he also says we’re at fault allowing this culture of dependence to replace personal responsibility in America, at the hands of school boards, politicians and special interest groups.

With TNT’s “A Christmas Story” marathon just two weeks away, we also discussed how the Consumer Product Safety Commission restricted sales of the very Red Ryder BB gun that Ralphie wants — a government agency telling a whole nation “you’ll shoot your eye out!”