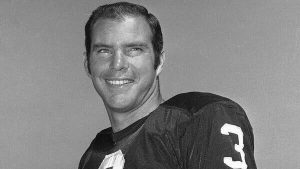 I learned a lot reading Richard Goldstein’s obituary of Daryle Lamonica, one of those football names from my youth. Along with guys like Jim Otto, Gene Upshaw, and Fred Biletnikoff, Lamonica led the Oakland Raiders to the Super Bowl and was one of the best quarterbacks of the late sixties and early seventies. He died Thursday at age 80.

Lamonica played in the infamous “Heidi” game, a Raiders-Jets game that aired on NBC — except for its exciting conclusion, because the network cut away to start showing the movie when the game ran into primetime. That kept viewers from seeing Lamonica lead the Raiders down the field to score two touchdowns in the last minute and win the game. It also led to an NFL rule preventing such circumstances from happening again.

By the way, has anyone watched even a minute of “Heidi” since?

As if that wasn’t enough, Lamonica also played in the Immaculate Reception game, a playoff battle between his Raiders and the Pittsburgh Steelers, which ended when one of Terry Bradshaw’s passes bounced off receiver Frenchy Fuqua and was caught just before it hit the ground by Franco Harris, who ran it in for a touchdown. In the intervening years, that play has been examined frame by frame as if it were the Zapruder film.

I also learned that it was Howard Cosell who nicknamed Lamonica the “Mad Bomber” because he threw the ball way downfield a lot. That was the Raiders’ strategy in those years, and it worked because Lamonica had such a strong arm — as other teams discovered by having to cover his receivers on deep routes over and over again.

But Goldstein says Lamonica wasn’t initially a fan of the nickname:

“I heard it and said, ‘What a dumb name,’” he recalled to The Las Vegas Review-Journal in 2020. But in his next game, as he recounted it: “I got out over center and looked out at the left corner. We made eye contact, and he backed up two steps. I thought, ‘Ooh, I like that. Maybe that’s not such a bad nickname.’ It stuck.”