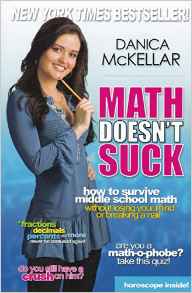 In between her roles as Winnie Cooper on “The Wonder Years” and Elsie Snuffin on “The West Wing,” Danica McKellar stopped acting long enough to go to college and get a degree in mathematics. Now she’s written a book called “Math Doesn’t Suck,” targeted at middle-school girls who probably feel the same way about the subject as she did in 7th grade.

As the father of a 13-year-old girl in a world where Paris and Britney and Lindsay get so much attention, I like Danica’s message that cute and smart is better than cute and dumb — a role model who says you can have a beautiful mind and body.

And yes, I asked her if anyone ever suggested a “Wonder Years” reunion show.