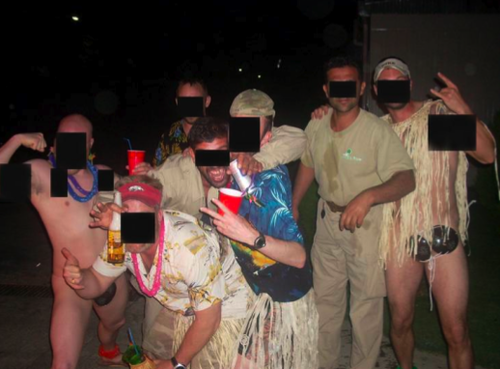 The Project On Government Oversight released a report this week about inappropriate behavior by some of the private military contractors who guard the US Embassy in Kabul, Afghanistan. Witnesses say the guards worked in a “Lord Of The Flies environment,” with hazing sessions, a climate of fear and coercion, and the kind of parties that get fraternities kicked off campus.

As POGO’s Adam Zagorin explained to me on KTRS/St. Louis this morning, these boys-gone-wild incidents are more than just a public relations nightmare in an Islamic nation with a different culture. They also threaten the safety of our embassy personnel there.

The Pentagon is using so many of these mercenaries in the wars that they outnumber the soldiers and Marines we have in Afghanistan, but there’s little released about the contractors, who are often given immunity for their actions and cost a lot more than members of the US military.

I asked Zagorin why there hasn’t been more oversight of the contractors by Congress (Missouri Senator Claire McCaskill is chairwoman of the Subcommittee on Contracting Oversight) and the State Department, which has known for at least two years about questionable behavior by employees of ArmorGroup. That’s the private contracting firm that, despite other problems, just had its contract renewed — at a cost of $189,000,000 — with your tax dollars and a look the other way.

ArmorGroup North America is a subsidiary of Wackenhut Services, which used to provide security at airports in the US. They and other companies in that business did such a bad job that they were replaced by the TSA, but only after years of lousy service.

Updated on Friday afternoon: the State Department announced late this morning that they have fired 8 of these guards who worked at the US Embassy in Kabul. The local management team of ArmorGroup North America is also “being replaced immediately” and a team from the Investigator General’s office is now in Kabul to look into the allegations. Two other guards resigned before the inspectors got there, but those resignations have been rescinded, the guards were fired, and all have had their security clearances revoked, so they will be unable to work again as a government contractor in a war zone.