Casey’s Countdown Comes To An End 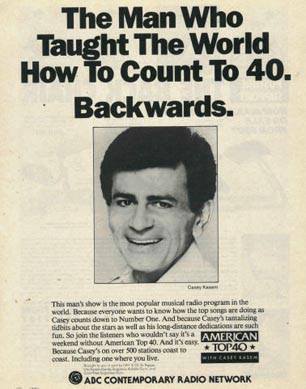 Legendary radio personality Casey Kasem died early yesterday at 82 of complications related to Parkinson’s. His last year was marked by ugly fights between his second wife, Jean, and his children from his first marriage. The tabloid details have been well documented, but shouldn’t obscure Casey’s place in the broadcasting pantheon. Here’s what I wrote about him on May 11, 2010…

David Letterman has had many celebrities, sports stars, and politicians do Top Ten Lists on his show. The formula is always Dave setting up the premise, announcing each slot in the list, then having the celebrity fill in the entry. Only once did they work it in reverse.

In September, 1993 (shortly after Dave moved from NBC to CBS), he brought in countdown king Casey Kasem to introduce the Top Ten Favorite Numbers, with Dave plugging the numbers into the respective slots. I got a real thrill out of this list because the concept was so surreal, yet simply and perfectly executed.

I always had a warm place in my heart for Casey because he was part of my first job in commercial radio, at WRCN/Riverhead, NY. On Saturday nights, I hosted a five-hour music show from 7pm to midnight playing what was then called “album-oriented rock.” Then I’d go out to a nightclub, have a few beers, try to get laid, go home (alone, more often than not), get way too little sleep, and come right back to the station on Sunday morning to run “AT40” for four hours, from 9am to 1pm (right after — I’m not kidding — the weekly polka show, hosted by Ed Toby, who made a mint selling and reading his own unique commercials geared to Riverhead’s large Polish community).

In those days, “American Top 40” was delivered to stations on vinyl records. My responsibilities were limited to playing each segment and inserting commercials and promos during the breaks, right after the jingle singers sang “Casey’s Coast To Coast!” That gave me plenty of time to marvel at how brilliant Casey’s formula (developed with Don Bustany, Tom Rounds, and Ron Jacobs) was.

This was the summer of 1978, eight years after “AT40” had debuted, and they had found their groove. As myriad DJs have proven since, anyone can play and introduce the most-popular songs in numerical order (I should know, as I did one a few years later when I hosted a nightly rock show on WHCN/Hartford), but “American Top 40” wasn’t really a music show — it was a story-telling show.

In an era long before the public could find out anything about any pop star from hundreds of online sources, Casey’s show was a rare place to hear fresh factoids about the artists, which he wove into his introductions and billboards with that magnificent voice. Some times his staff dug up something as mundane as the names of a singer’s dogs. Other times they’d give you a quick bio on a new star or songwriter who was just emerging.

Each show always included one Long Distance Dedication, Casey’s version of a song request on steroids. He’d read an excerpt of a listener’s letter, usually describing some heartbreaking story about lost love, found love, a reunited family, or a soldier away from home. Then he’d play the one song that meant so much to everyone involved. There were some weeks when I could hear the tears forming in our listeners’ eyes.

Once an hour, Casey would plug two or three of his hundreds of affiliates (“American Top 40 is heard in the fifty states and around the world every week on great radio stations like….”), and I still remember the thrill I felt when he said our call letters. I knew he was just working off a list and we’d come up at random in the rotation, but it was still cool to be sitting there all by myself in this radio studio next to an abandoned drive-in movie theater and hear a famous guy in Hollywood mention the tiny station I worked for.

“American Top 40” drew its playlist from the Billboard pop chart, and as the number of disco songs on the show increased, WRCN Program Director Don Brink decided they didn’t really fit with the rest of the station’s AOR format — it was jarring to have Casey’s show end with “Boogie Oogie Oogie” by Taste Of Honey and then have our next DJ start his show with “That Smell” by Lynyrd Skynyrd — so the show was dropped (although the polka show outlasted my 3-year stay there). Somehow, “American Top 40” was able to survive our defection, and Casey kept counting them down, on one show or another, into the early years of the 21st century.