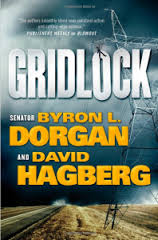 Former Senator Byron Dorgan joined me on America Weekend to talk about his new novel, “Gridlock,” about a cyber-attack on the US electrical grid. We discussed the real-world possibility of such an attack, why little has been done to fortify our cyber-infrastructure, and who the likely suspects would be in the event of such an attack. I also asked him why, in his 30 years in the House and Senate, so little was done at the federal level to prepare for such a threat.