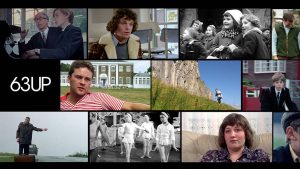 My wife is a big fan of the “Up” documentary series, which began in 1964 with a group of 14 seven-year-old British school kids of different socio-economic backgrounds. Those interviews became the basis of “7 Up” and the sequels “14 Up,” “21 Up,” “28 Up,” etc. — directed by Michael Apted, taking over from original creator Paul Almond.

The series of movies, which aired on ITV in England, provided a fascinating look at the impact class had on the lives of the children as they became adults. Apted got most of the participants to open up about their jobs, marriages, relationships, high points, low points, and much more. The latest entry in the series, “63 Up,” was broadcast in the UK in 2019. It will likely be the final chapter, as Apted died in January, 2021.

Unfortunately, the pandemic hit before “63 Up” could make it to American movie screens. Even now, it’s not on DVD, and is only available for streaming on one service, BritBox, which we don’t subscribe to. But Martha wanted to see it, so she signed up for a free seven-day trial. It turns out the film is as delightful as its predecessors.

After we watched it, she began browsing around the BritBox app to see what else might be worth our time. She loves detective and mystery shows, so she latched onto one called “Vera,” which she has been binge-watching for the last couple of days.

I, on the other hand, discovered some wonderful British panel shows — an art form that hasn’t really existed in the US for a few decades, when “What’s My Line,” “I’ve Got A Secret,” and “To Tell The Truth” were primetime mainstays. “Truth” has been rebooted a few times, and is currently part of ABC’s “Fun and Games” rotation, along with the similarly resurrected “Match Game,” but that’s about it.

But in the UK, the TV schedule is full of panel shows, the three most popular being “QI” (hosted by Stephen Fry), “8 Out Of 10 Cats” (hosted by Jimmy Carr), and my personal favorite, “Would I Lie To You?” That show is hosted by Rob Brydon, with two teams led by regulars Lee Mack and David Mitchell, who have to figure out whether the story being told by one of them is true or a lie.

As with “Whose Line Is It Anyway?” there’s a scoring system, but it doesn’t matter because there are no prizes and no contestants. It’s just a bunch of wickedly clever, whip-smart comedians and other media personalities ad-libbing their way through a half-hour of fun. The fact that there’s no script aside from the basic framework is what makes the show so enjoyable, as the players mock each other, show off their quick wits, and genuinely laugh at the others’ jokes. I’m talking real laughter, not Jimmy Fallon everything-is-hysterical laughter. Even Brydon — so good in the “Trip” series and “Swimming With Men” — gets into the interrogatory mix while keeping the game moving.

I wish some American TV network would take a gamble on shows like these. The most recent attempt was Comedy Central’s “@Midnight,” hosted by Chris Hardwick (when he was still a thing) and featuring some very amusing people. But it aired in late night, where the comedy competition is tough. If there were to be a US version of the UK shows, it would have to hew to the 30-minute format (since many of the shows air on the BBC, which has no commercials, you get the full half-hour of content), lean away from topical issues, and book talent based on their ability to banter with a smile. The stories on “Would I Lie To You?” are always personal and allow the participants’ personalities to shine.

What’s interesting is that, although I’ve watched about a dozen episodes, I haven’t recognized any of the panelists on “WILTY” because, while they’re known in the UK, they haven’t had any exposure in the US. I don’t get some of the references, either, but that hasn’t stopped me from enjoying the hell out of the shows. I’d think it wouldn’t be too hard to find enough quick wits in the US to duplicate the British original, if only some outlet would take a chance.

Updated 4/16/21 at 12:36pm…It looks like I’m just a little late with this idea. According to a Deadline piece by Peter White, The CW is planning to produce a US version of “Would I Lie To You?” produced by Michelle and Robert King, showrunners of “The Good Wife/Fight.” No word yet on who will appear as the host and team captains, or when it will air. The network has also bought the rights to two seasons of the British version of “WILTY.” I’d guess it will air those first, then have new American episodes ready to premiere later. Thanks to Adam Bowie for the link.