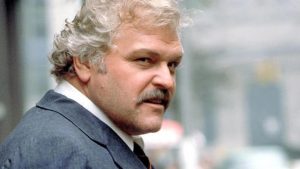 This afternoon, I’ve seen several media outlets that, in articles about his death at age 81, refer to Brian Dennehy as an actor known for “Tommy Boy.”

Dennehy was a prolific performer with dozens of credits better than the 1995 Chris Farley vehicle. In fact, starting in the mid-1980s, he had starring or supporting roles in two or three really good movies a year, and kept it up for at least couple of decades. To name just a few of his better big-screen projects: “Cocoon,” “Silverado,” “F/X,” “Foul Play,” “Legal Eagles,” and “Presumed Innocent.”

He also did tons of work on stage and television, including a TV movie version of “Death Of A Salesman,” which he filmed after playing Willy Loman on Broadway and in a national tour. It earned him multiple awards. Even when he appeared in sub-par entertainment, Dennehy was one of those actors you could count on to lift the material to a higher level. He couldn’t save a bad movie, but he was never bad in a movie.

Unfortunately, as good as he was performing words written by others, Dennehy wasn’t a great guest. I only chatted with him once on my radio show, either during the “Death Of A Salesman” or “Long Day’s Journey Into Night” stage tour. I was excited to have him on because I respected his work so much, but getting him to share interesting anecdotes was like pulling teeth.

Still, for a long time, he was a go-to gold standard for both Hollywood and Broadway, and anyone who saw him — in anything — recognized why.