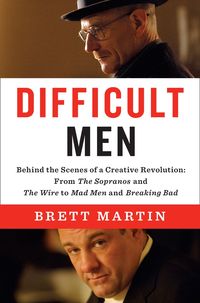 Tony Soprano. Walter White. Don Draper. All anti-heroes. All the central character in shows that have changed television over the last decade-and-a-half.

Brett Martin writes about these characters and the men who created them in “Difficult Men: Behind The Scenes Of A Creative Revolution.” He joined me today on KTRS/St. Louis to discuss the showrunners whose singular visions have filled our screens, from antecedents like Steven Bochco and David Simon to the current generation of David Chase, Matthew Weiner, and Vince Gilligan. We also talked about why so few women fill those jobs (both in front of and behind the camera), the economics of shows on cable with smaller audiences, and the new role of Netflix and other content providers.