The Breast Super Bowl Ever 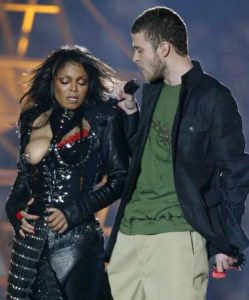 There’s a scene in “Casablanca” where Claude Rains, the chief of police, tells Humphrey Bogart that his cafe is being closed immediately. When Bogart asks why, Reins replies, “I’m shocked, shocked to find out that gambling is going on in here!” It’s at that point that a roulette croupier appears, hands Rains a wad of money, and says, “Your winnings, sir!”

It’s a classic moment of hypocrisy.

So was the response by CBS, MTV, and the NFL to the controversy over Janet Jackson’s breast being exposed during the Super Bowl halftime show.

The NFL released a statement, saying it was “extremely disappointed by elements of the MTV-produced halftime show.” Well, sure, when you go with an outfit like MTV, you expect to get nothing but class, right?

As for MTV, they’re the ones who promised, in a press release just days before the big event, that the halftime show would include “shocking moments.” Now they’re shocked — shocked, I say! — to discover a breast was bared! That doesn’t meet the sophisticated entertainment level MTV is known for.

CBS claimed that it had seen the rehearsals for the halftime show all week and had no idea such an outrageous thing would happen. Funny, they didn’t seem to mind all the bumping and grinding by the half-dressed dancers and the crotch-grabbing by Nelly and others. That was CBS’s way of making sure you didn’t tune away to the Lingerie Bowl (which, ironically, contained less nudity than the Super Bowl!).

At least CBS had a fallback. They could have cut away to a spot for Levitra, the erectile dysfunction pill. Or Cialis, the competition, whose commercial included this remarkable line in its fine-print voiceover: “erections lasting longer than 4 hours, though rare, require immediate medical help.”

Four hours? That’s a long time, even if you are Sting. No man has gotten that excited for that long since Karl Rove dreamt that the Democratic ticket would be Dennis Kucinich and Al Sharpton. It’s nice that the pharmaceutical company decided on a reasonable limit there. Two consecutive hours of arousal is nothing, you whiner. At three hours, check for your shadow. If you see it, it means six more weeks of winter.

Other Super Bowl moments lowered the bar, too. Anheuser-Busch, which in the past has produced some of the best and most clever advertising, should be ashamed of its 2004 effort. The commercial with the dog biting the man in the crotch was among the first to air during the game, and helped set the tone for the evening. Later, there was the farting horse, complete with gaseous sound effect. This is crude, cheap comedy, and it was unnecessary.

I’m not a prude by any means, but this was not appropriate for my nine-year-old daughter, who was watching with me. When her judgement is more mature than the adults producing so-called family entertainment, there’s something amiss.

It wasn’t just the makers of Budweiser caught in this avalanche of the lowbrow. Chevy showed kids getting their mouths washed out with soap for saying “Holy Sh*t!” The network cameras routinely returned from commercial breaks with obligatory sideline shots of skimpily-dressed cheerleaders dancing like strippers.

So, who raised the bar? Beyonce Knowles, for one. Her rendition of the national anthem was simply beautiful, the best since Whitney Houston. The shock was seeing Beyonce fully dressed, a departure from her usual fashion choice whenever TV cameras are pointed her way.

To no one’s surprise, the makers of Tivo say that the Janet Jackson breast-exposure was the most-replayed part of the Super Bowl broadcast. It’s been scrutinized more than the Zapruder film. If you examine the footage closely enough, over and over again, you can see her nipple going back and to the left.

Even the FCC is getting involved, calling for an investigation into how such an outrage could have been broadcast. It was merely coincidental that this announcement was made on the same day President Bush reluctantly agreed to appoint an independent commission looking into intelligence failures before the war with Iraq.