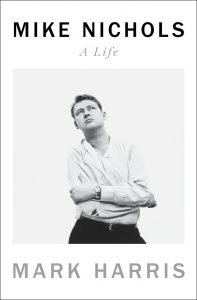 Mike Nichols had an extraordinary career.

On Broadway, he won Tonys for directing “Barefoot In The Park,” “Luv,” “The Odd Couple,” “Annie,” “Spamalot,” “Death Of A Salesman,” and a few more.

In Hollywood, he won an Oscar for directing “The Graduate,” and helmed such classics as “Silkwood,” “Working Girl,” “Carnal Knowledge,” “Biloxi Blues,” “Postcards From The Edge,” “The Birdcage,” “Primary Colors,” “Wit,” “Angels In America,” and “Who’s Afraid Of Virginia Woolf?”

On top of that, his early work with Elaine May made them one of the most influential comedy teams in history — and Grammy winners, too. And his four Emmy awards made him the rarest of show business talents, an EGOT winner.

How do you recap all of that in print? Mark Harris fills over 600 pages in his engrossing book, “Mike Nichols: A Life.” Harris delves into nearly every aspect of Nichols’ personal and professional history, from his early days as a German immigrant — with a condition that caused him to lose his hair as a boy, forcing him to wear bad toupees for many years — right through his last breath at age 83. Along the way, Harris digs in to not only relate the stories behind Nichols’ hits, but also his many misses — including multiple marriages, an addiction to cocaine, and a tendency to spend way too much money.

Harris, who got access to his subject as well as many collaborators and family members, credits Nichols’ brilliance as a stage and screen director to the special connection he made with so many actors. He was able to coax the best out of each of them, even when there was trouble. Those stories, as well as Nichols’ own struggles, make for a dynamic and compelling book in which I learned several things I hadn’t known — like what a miserable jerk Walter Matthau could be. So much so that Nichols made a new rule after working with him on “The Odd Couple” — not to work with assholes ever again.

Even so, he had to overcome a lot of actor-created obstacles (e.g. Melanie Griffith’s cocaine addiction), as well as alcoholics like Richard Burton, Art Carney, and George C. Scott. I’m amazed Nichols worked with the latter multiple times, despite the problems Scott caused on many productions.

One part of the book that’s become problematic since Harris wrote it is the close friendship between Nichols and uber-producer Scott Rudin, who has only recently been taken to task for his Big Bully reputation and the horrible work environments he created. But that doesn’t obscure the stories from the six-decade career of a show business legend whose work remains as important today as when he created it.

Harris’ 2008 book, “Pictures At A Revolution,” was a wonderful read, a fascinating look at the five movies nominated for Best Picture of 1967 and the impact four of them had on Hollywood’s next wave. One of those was “The Graduate,” which gave him an entrée into Nichols’ world and a peek at the creative spark that made him such an important director.