I’ve read three wonderful books over the last couple of weeks that are worth recommending to you. 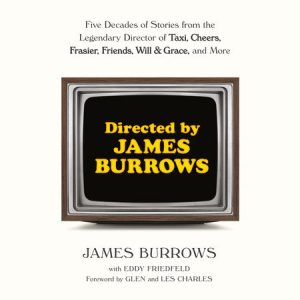 “Directed by James Burrows” is the autobiography of the man who has directed more sitcom episodes than anyone in history — over a thousand. From “Friends” to “Taxi” to “Cheers” to “Will & Grace” to “Frasier,” Burrows has been not just the guy calling the camera shots, but a partner with the writers and showrunners in shaping the shows.

His book is full of fascinating stories, including many about his father, Abe, who wrote or directed such Broadway shows as “Guys and Dolls,” “How To Succeed In Business Without Really Trying,” and “Cactus Flower.” James tells lots of behind-the-scenes stories about the stars and creators of the many, many shows he’s worked on which have been among the best of the last 50 years.

I usually dislike it when someone tells their life story in a linear way from birth to death, but Burrows shares anecdotes about crossing paths with and/or working with such legends as George S. Kaufman, Groucho Marx, Mary Tyler Moore, Grant Tinker, Brandon Tartikoff, and Norman Lear (to name just a few). A great, fun read. 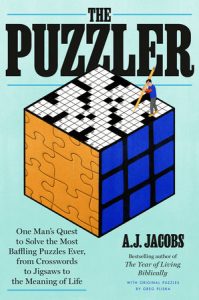 AJ Jacobs was always a money-in-the-bank guest on my radio shows because he’s had so many adventures as a participatory journalist. He’s written books about his experiences living by biblical rules for a year, reading the entire Encyclopedia Brittanica, experimenting with health fads, and digging deep into his family tree (he discovered he’s a distant cousin of pretty much everyone, including me).

His latest is “The Puzzler: One Man’s Quest to Solve the Most Baffling Puzzles Ever, from Crosswords to Jigsaws to the Meaning of Life.” Typically for AJ, he’s not satisfied with just learning how to solve certain puzzles. He’s determined to take on the toughest puzzles in each category, including Japanese puzzle boxes, a genre I wasn’t familiar with.

In “The Puzzler,” AJ includes plenty of puzzles of all kinds for readers to try — most of which left me stumped, although I always enjoy a good rebus. If you’re into puzzles, you may want to buy this one instead of getting it out of the library. That way you won’t feel guilty when you pencil in your answers. 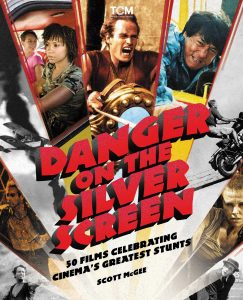 “Danger on the Silver Screen” is Scott McGee’s look at some of the greatest stunt work done in movies since the early 20th century.

I was already familiar with Buster Keaton’s classic gag from “Steamboat Bill, Jr.” in which the wall of a house falls on him yet he survives because he’s standing exactly where a window is situated. But I didn’t know that Keaton only had about two inches of leeway on each side, so if he wasn’t positioned perfectly, he could have been maimed or killed.

There are also stories about the chariot race in “Ben-Hur,” the chases in “Bullitt” and “The French Connection,” fight scenes from “Atomic Blonde” and “John Wick,” the mud slide in “Romancing The Stone,” the car stunts in “Smokey and the Bandit” and “The Bourne Supremacy,” and a bunch of opening scenes from James Bond movies.

McGee — a programmer for Turner Classic Movies — also discusses Tom Cruise hanging off the side of an airplane taking flight and scaling the outside of the Burj Khalifa skyscraper in Dubai. Along the way, McGee talks about iconic stunt people like Yakima Canutt, Hal Needham, and some of the female performers highlighted in the 2020 documentary “Stuntwomen” (which I reviewed here). Riveting stuff.