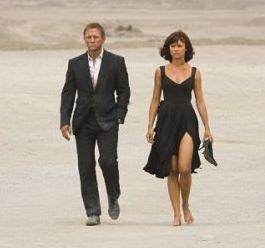 When I walked out of the new Bond movie, “Quantum of Solace,” earlier today, I was shaking my head — and not just because I have no idea what the title means.

The Bond movies usually have an incomprehensible and ludicrous plot, but they make up for it with witty dialogue, fabulous babes, and fantastic stunt work. Unfortunately, in the Daniel Craig era, we have the quiet, stoic Bond, so the clever verbiage is gone. As for the Bond Babes, they were forgotten before the credits rolled. And thanks to director Mark Forster, we can’t enjoy the work of the stunt team because he has edited the action sequences within an inch of their lives.

There must be a hundred cuts a minute in each stunt scene. I’ve seen music videos with fewer jump cuts. We know there’s mayhem taking place, but we rarely get to see anything long enough to recognize what it is. It’s so fast that people with ADD can’t keep up. The dramatic parts of the story — particularly those with Dame Judy Dench as M — are told in slow, rolling tones, but when it’s Bond vs. Bad Guy, it’s cut so quickly you’d think the editor was paid by the edit (and become fabulously wealthy, judging by the end product).

Also, this Bond engages in a lot more hand-to-hand combat and — while we’re used to seeing heroes and villains punch and kick each other repeatedly without losing even a sliver of ability to continue fighting — the gadgets are all missing. They long ago killed off Q, Bond’s technical wizard, but the void needs to be filled by someone or something that makes you say, “now that’s cool!”

Apparently, the only new gadget in the Bond arsenal is high-speed editing software.