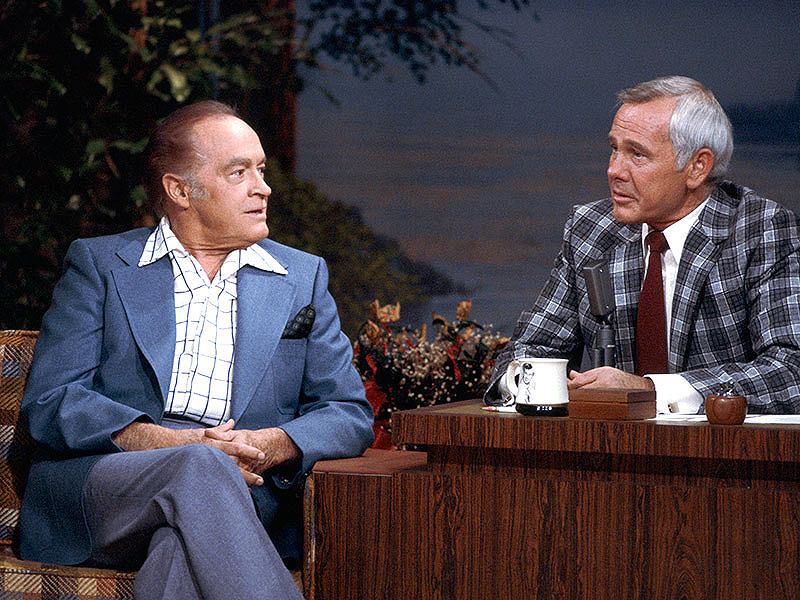 I was never a Bob Hope fan. He didn’t make me laugh, and his right-wing politics and embracing of all things military turned me off. The thing that bothered me the most was that, on his rarely-funny TV specials, it was clear he was blatantly reading all of his material, written by his staff, off of cue cards. There was never a spontaneous or genuine moment to be had.

In a new bio of Bob Hope, Richard Zoglin writes about Hope’s cue card dependency, his air of superiority, and his misogyny. The book includes this excerpt about his relationship with NBC’s other huge star, Johnny Carson, who apparently didn’t think much of Hope:

Despite his debt to Hope as a per­former, Carson never warmed to the older comedian, either personally or professionally. The Tonight Show host would often mimic and pay homage to the classic comedians he adored—Jack Benny, Groucho Marx, George Burns. He almost never referenced Hope. “Johnny admired Hope’s place in show business,” said Tonight Show producer Peter Lassally, “but he was not a great admirer of his work.”


The coolness between them was in part a reflection of their rivalry. Carson was the only star at NBC who could challenge Hope for clout at the network. Yet Hope was still king, and Carson had to defer. Car­son resented the way Hope could virtually book himself on the Tonight Show whenever he had something to promote, which seemed to be all the time. “We’d get a request,” said Lassally, “and Johnny would go, ‘Again?’ And I’d say, ‘Do you want to tell him no?’ And he’d say, ‘No. You can’t turn down Bob Hope.’ ” Hope would bring in highlight reels from his specials that went on interminably. “We’d say, give us two minutes,” said Jeff Sotzing, Carson’s nephew and a Tonight Show producer. “He’d bring in five minutes, cut together with a rusty knife. That was frustrating.” Once, after a Carson monologue that went over particularly well, Hope asked during a commercial break if he could use some of the laughter on his upcoming special. Flabbergasted, Car­son said okay; later, on Hope’s special, Johnny claimed he could hear Ed McMahon laughing at Bob’s jokes.


Worst of all, from Carson’s point of view, Hope was not a good guest. He came armed with scripted jokes and would rarely engage in any genuine conversation—especially in the later years, when his bad hearing complicated the give-and-take. “There was nothing spontaneous about Hope,” said Andrew Nicholls, Carson’s former co–head writer.


“He was a guy who relied on his writers for every topic. Johnny was very quick on his feet. Very well read. He was a guy who learned Swahili, learned Russian, learned astronomy. He appreciated people who he felt engaged with the real world. There was nothing to talk to Bob about.”

Which reminds me of a joke.

A guy gets to a corner and as he’s waiting for the light to change so he can cross the street, he notices Bob Hope standing next to him, staring straight ahead. The guy says to the big star, “Mr. Hope, I’m a big fan of yours and love everything you’ve done. I know you get criticism for depending on cue cards for reading all your material, but I don’t care. From the movies to the USO tours to the golf tournaments to the TV specials, you’re probably my favorite comedian of all time!”

To which Hope, still staring straight ahead, replies, “Don’t walk!”