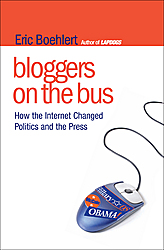 What role did the blogosphere play in electing Barack Obama? Eric Boehlert says bloggers’ influence was both enormous and historic. He makes the case in “Bloggers On The Bus: How The Internet Changed Politics and the Press,” which we discussed today on KIRO/Seattle.

Boehlert explained how and why so many individuals got involved online, and how the Obama campaign used their passion to develop widespread internet support unlike any other. He also offers props to Ron Paul, the only Republican who understood the power of netroots, but found his party unwilling (or unable) to run with that ball.

Boehlert talked about which bloggers became stars, capable of driving the day’s news agenda with their investigations and commentary, even without recognition from the mainstream media, which continues to ignore them (what’s the last time you saw a powerful blogger included on a cable news panel of pundits?). I also asked him whether the liberal blogosphere’s targeting of Sarah Palin last summer was over the top, or merely a mirror image of the way conservative broadcast media attacked and drooled over the Clintons and Nancy Pelosi.