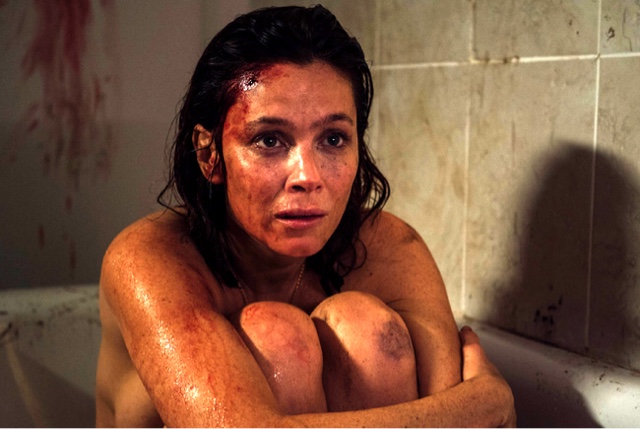 My wife and I just finished watching all 8 episodes of “Marcella,” a crime series streaming on Netflix. It opens with the scene pictured above, as a woman wakes up to find herself in a bathtub with blood on her body and the walls. And she’s the heroine!

Marcella Backland (Anna Thiel) is a detective in London who comes out of retirement to re-join the homicide squad looking into a murder that may be connected to a serial killer she’d investigated years earlier. I won’t tell you anything about the case, but I will say that Marcella fits nicely into the annals of brilliant but seriously flawed detectives.

The only problem we had with the show is that there are three actors who are hard to tell apart — they’re all thin, with dark hair, and the same British accent. In fact, I wasn’t 100% sure which was which until the final episode. But that didn’t detract from my enjoyment of the show.

The “Marcella” season comprises eight episodes that run about 45 minutes each. It doesn’t answer all the questions it raises (none of which I’ll spoil), but perhaps will address them in a second season I hope Netflix is planning. Meanwhile, you should consider adding “Marcella” to your Netflix queue.

One final note: “Marcella” highlights one of my continuing frustrations as a Netflix customer. I only found about about the show because my friend Darryl happened upon it by chance. With the company spending so many dollars to create new series, you’d think it would have a better way to let us know what it has to offer. Sure, I can go to the Netflix site and browse through the titles chosen for me by its recommendations software, but I don’t do that on a regular basis, and I don’t think other members do, either.

It would increase viewership (and interest) if Netflix sent out a weekly email telling us what’s new — from originals to movies it has acquired and begun streaming — complete with brief explanations of what they are. While there’s lots of publicity for series like “House Of Cards,” with Kevin Spacey hitting the talk-show circuit to promote each new season, there are a lot of other gems that are going undiscovered except by word of mouth. Netflix should work on getting them discovered by more people.