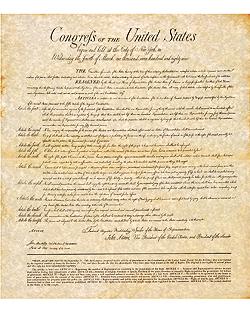 Today is the 219th birthday of the greatest document ever written — The Bill Of Rights.

It would be nice to say that most Americans know what’s enumerated in the Bill Of Rights, but they don’t (including elected officials who swear to uphold the Constitution Of The United States but are rarely fluent in its contents). If you’re among them, try reviewing them now and then thanking James Madison for starting the ball rolling.

My friend Chris Bliss has spent several years trying to get a national Bill Of Rights monument. He’s received approval for one at the Texas state capitol, and is still raising funds to make it happen. Meanwhile, he has helped erect one in a town square in Montezuma, Iowa, and will next build one in Everett, Washington. He explains his cause on the MyBillOfRights.org website,

The origin and significance of the Bill of Rights is barely even taught in our schools; and its 10 Amendments are even more rarely publicly displayed. Not until 2008 was there a single permanent display of the Bill of Rights anywhere in America, and there is still not a single major public celebration of this remarkable document.

This is not just a matter of neglecting our history. The concepts developed in the Bill of Rights have much light to shed on our current dilemma. The free exchange of ideas is not just essential to civic discourse; it also produces the innovations that drive prosperity. Checks and balances, designed to limit concentrations of power and their abuse, also promote transparency and accountability; the lifeblood of free markets. The right to bear arms and the presumption of innocence both put the government on notice as to who is the master and who the servant in our Republic, as timely a message today as ever.

What too many forget is that the BOR is not a list of rights granted to Americans by our government. You were born with those rights and didn’t need any document or official imprimatur to earn them. To the contrary, the BOR is a list of restrictions placed on our government (“Congress shall make no law…”) regarding those rights.

Unfortunately, although the US still stands well above much of the world when it comes to these freedoms, our rights are constantly under attack, as Tim Lynch points out, so we must be eternally vigilant and protective of them.

On the bulletin board above my desk, I keep the Security Edition of the Bill of Rights. It’s made of sheet metal and lists the text of all ten amendments, with the 4th amendment highlighted. Dean Cameron created the Security Edition for use when you fly — you stick it in your shirt pocket, and when the metal detector beeps and the TSA agent tries to confiscate the card-shaped item you’re carrying, you can ask him if he is literally taking away your rights. You can order yours (or the non-metallic luggage tags for those who don’t want the hassle) here.