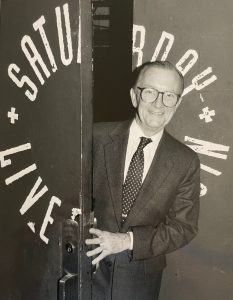 You’re probably not familiar with the name Bill Clotworthy, who died last week at 95. With the official title Director Of Program Standards, Clotworthy was NBC’s censor, and thus worked with the writers, performers, and producers on “Saturday Night Live,” overseeing what could and couldn’t get on the air. A little more than a decade after he retired, he wrote “SNL: Equal Opportunity Offender,” and that’s when I got to interview him.

In our conversation, Clotworthy explained what his role as censor entailed, and how he handled things like cast member Charles Rocket dropping the F-bomb live on the air. Or a sketch called “Nude Beach,” in which Matthew Broderick and some male cast members uttered the word “penis” dozens of times. Or how furious Clotworthy was when Sam Kinison ignored his warnings about material that he felt was inappropriate for network television — even late at night. He also discussed some of the special interest groups he heard from regularly who were offended by something on “SNL” and his thoughts about Sinead O’Connor ripping up a picture of the pope on camera (an incident that occurred after Clotworthy’s era).

Though he had the nickname “Dr. No,” he was actually quite friendly with most of the people he worked with at “SNL,” and I found him a pleasure to speak with. You can listen to our entire 19-minute conversation here — uncensored, of course.