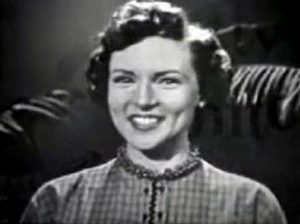 I don’t have any personal stories about comedy legend Betty White, who died a few days ago at 99. I never interviewed her, but I’m sure, since she’d been in showbiz for decades, she would have been a great guest with lots of funny stories.

There are plenty of obits that mention her roles on “The Golden Girls,” “The Mary Tyler Moore Show,” and tons of game shows — not to mention a slew of awards — but here’s the piece of her Wikipedia bio that shocked me:

In 1949, she began appearing as co-host with Al Jarvis on his daily live television variety show “Hollywood on Television,” originally called “Make Believe Ballroom,” on KFWB and on KCOP-TV in Los Angeles. White began hosting the show by herself in 1952 after Jarvis’s departure, spanning five and a half hours of live ad lib television six days per week, over a continuous four-year span.

Thirty-three hours a week as the sole host of a live, mostly unscripted television show? Unthinkable. Sure, it was in the earliest days of the medium, where the few people who owned sets were happy to see anything that moved. Besides, there was only one other TV station on the air at those hours in Los Angeles. Still — and I say this as someone who had to fill a lot of broadcast hours over several decades — that sounds like an impossible feat.

In fact, it was too much for Eddie Albert, who served as White’s co-host after Jarvis left, but couldn’t take the pace and demands of being on camera that much, so he left after six months. Meanwhile, White just kept on going. She didn’t even get a chance to rest during the commercial breaks, because she had to read many of the sponsor’s messages!

I can’t think of a single modern-day television personality who could fill that much airtime every week, and keep it up for four years. The “Today” show airs for four hours each morning, but the anchors each do two, at most. I suppose Robin Meade, anchor of “Morning Express” on HLN comes the closest, but over the course of that show’s five hours a day, many segments — often entire half-hours — are rerun from earlier.

Remember, White wasn’t doing a news show — it was merely entertainment. Could any of the late-night hosts (e.g. Colbert, Kimmel, Corden) pull it off? They don’t even do five nights a week of original shows — and they each have a writing staff that numbers in the double digits. If White had any writers, it probably wasn’t more than two or three.

When Carl Reiner — who started in television in 1948 — died in 2020, the title of Longest Continuous Television Career was passed to Betty White. Now that she’s gone, I don’t know who the new titleholder is, but I bet they didn’t match what she did for those four years.