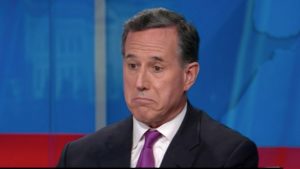 Amanda Marcotte has an excellent piece about CNN finally firing right-wing loudmouth Rick Santorum, but faced with the dilemma of finding a reasonable Republican to replace him on its panels. If it were up to me, all the news networks would stop hiring failed politicians to offer partisan opinions. But here’s Amanda…

Even by “white man failing up” standards, it was plain weird that CNN hired Santorum as a commentator in 2017.

It’s understandable, then, that most of the reactions to Santorum’s firing were of the “took you long enough” variety. He does not have anything interesting or important to say, ever, about anything, which seems like it should be disqualifying from a role as a handsomely paid pundit.

Still, I have some sympathies for the dilemma that CNN is facing. Santorum may be a stone-cold idiot and a bigot, but it’s not like there are a lot of good options for the network — or any other mainstream media organization — when it comes to hiring pundits or opinion writers to articulate Republican beliefs for their audiences.

Media outlets face an increasingly difficult conundrum in trying to figure out what conservative voices to elevate. If a Republican is reasonable, then they’re not really representative of true conservative thought in the modern U.S. If they are representative, however, they’re going to be too stupid or bigoted — or, as Santorum shows, a combination of both — to put on the air.