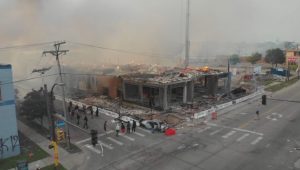 My friend Perry Simon on the disappointing predictability of how talk radio is handling the Minneapolis story:

Friday morning, I did my occasional listening tour of talk radio stations across the country, and I wondered, with the biggest stories right there on video or Twitter and hard to dispute, would the hosts labor to find ways to defend the indefensible or would they acknowledge what the world could plainly see and, for once, admit the obvious? If I could have bet the former, I would have, and I’d have done pretty well. Talk radio hosts were twisting into knots trying to come up with ways to tell listeners that what they saw is not what they saw at all but proved conclusively that… well, I’m not sure, but logic and facts were in scant supply. The hosts were playing to their audience, and I suppose that makes sense on a purely business level.

But does it? Because the more you double and triple down on something, the narrower your audience gets. You’re holding onto that P1 bunch for dear life, but the casual listener, the ones who aren’t all-in, are going to notice that you’re being predictably contrary in the face of all evidence. They’re the independent voters in your radio ratings election. Maybe it’s a mistake to care about them, but here’s a thought: Will those P1s really quit you if you stray from the official line on anything? They may SAY they will, but will they? Or will they still listen anyway because their ire is more bluster than commitment? And how many other listeners are you blowing off because you look at a TV news reporter and crew being arrested live on camera and, as I heard one host say Friday morning, you claim that the police were actually merely protecting them from possible violence by moving them away? Can your listeners trust your independence and opinions, or are you just giving them what you think they want (and what they can get, incidentally, from their social media bubbles)?