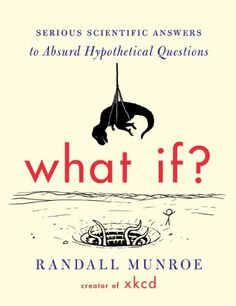 In his book “What If?” Randall Munroe has worked out the serious scientific answers to absurd hypothetical questions, including:

He answers all the questions (contributed by readers of his website) with scientific accuracy, going into remarkable detail on many of them, often extrapolating to the point where something blows up (a la The Mythbusters).
Munroe also injects just the required amount of snark. For example, a guy named Chad asked, “What if you strapped c4 to a boomerang? Could this be an effective weapon, or would it be as stupid as it sounds?” Munroe’s answer: “Aerodynamics aside, I’m curious what tactical advantage you’re expecting to gain by having the high explosive fly back at you if it misses the target.”

The only one I was able to figure out without reading Munroe’s answer was “What is the farthest one human being has ever been from every other living person?” I’ll post the answer here later today, but I recommend you get the book for the answers to the rest (and many more).