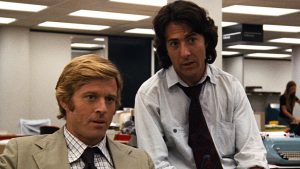 Ann Hornaday of the Washington Post has written a superb piece about the making of the best movie ever about newspaper journalism, “All The President’s Men.”

No movie springs perfectly formed from page to screen. But to read Woodward’s marked-up draft of Goldman’s screenplay is to realize that the “All the President’s Men” we know — the lean, flawlessly calibrated thriller that made millions at the box office when it came out in 1976,earned four Oscars and turned Woodward and Bernstein into legends; the movie that’s worshiped by reporters, political junkies and filmmakers alike; the movie that from the moment it opened seemed to fuse seamlessly with private memory and collective myth — that movie came perilously close to being forgettable, along, quite possibly, with Watergate itself.

The journey of “All the President’s Men” from mediocrity to triumph tells an alternately sobering and inspiring truth about movies: The great ones are a function of the countless mistakes that didn’t get made — the myriad bad calls, lapses in taste and bouts of bad luck that encase every production like a block of heavy, unyielding stone.

This is the story of how Redford and Pakula, and the cast and crew they assembled, bullied Goldman’s flawed but structurally brilliant script into art. It’s the story of a perfect movie and imperfect history, a cautionary tale whose lessons — about impunity, abuse of power and intimidation of the press — have taken on new urgency nearly 50 years after its release. It’s the story of how what was intended as a small-bore black-and-white character study featuring unknown actors became one of the finest films of the 20th century, one that marked the end of a cinematic era, changed journalism forever and — for better or worse — became the fractal through which we’ve come to understand the dizzyingly complicated saga known as Watergate.