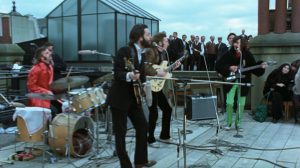 I’ll post my review of the Beatles documentary “Get Back” on Monday, after I stop laughing at the list of moments that were edited out, as conceived by former “Late Show with David Letterman” writer Bill Scheft. It starts with this half-dozen:

Day 1: Paul shows up to Twickenham Studios with 11 new songs, plus a formula for a future unknown pandemic vaccine he jotted down in the cab on the way over.

Day 2: Peter Sellers drops by Twickenham to say hello to Ringo, his co-star in the upcoming film, “The Magic Christian.” The visit is cut short when Yoko Ono asks Sellers if he’ll call her estranged husband’s divorce lawyer and threaten him using the Clouseau voice.

Day 3: Paul, George and Ringo arrive to find John and Yoko have covered entire Twickenham Studios in bed sheets. Before passing out on scaffolding, John declares the Beatles “are bigger than Christo.”

Day 4: George briefly quits band after Paul mildly criticizes the way he pats a pack of cigarettes against the palm of his hand.

Day 6: After lunch, the Hare Krishna invited to Twickenham by George rolls up rug, announces he’s going back to school to become a substance abuse counselor. Recording engineer Glyn Johns convinces him to leave the rug or it’ll be another nine hours reworking the acoustic levels.