After giving you my lists of the Best Movies Of 2021 and the Worst Movies Of 2021, I’m finishing the week with the ten Best Documentaries Of 2021. Of course, I didn’t see every doc that was released in the last twelve months, but of those I watched, these were the ones that made the biggest impression on me.

Note that this list does not include documentaries that played out over several episodes on television. Thus, I have not included two great Beatles docs that were released last year: “Get Back” (three episodes on Disney+) and “McCartney 3, 2, 1” (six episodes on Apple TV).

These are my capsule reviews. You can read the full versions by clicking on the movie title. If any of them strike your fancy, check JustWatch.com to see if they’re available for streaming. 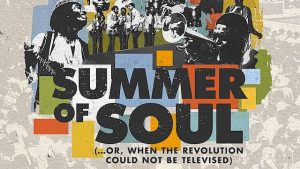 #1: “Summer of Soul” This movie not only deserves the top spot, but belongs in the pantheon of great concert documentaries alongside “Stop Making Sense” and “The Last Waltz.” In the summer of 1969, while white kids flocked to upstate New York for the Woodstock Festival, the city of New York hosted the Harlem Cultural Festival over the course of six weekends, drawing hundreds of thousands of people — overwhelmingly Black — to hear some of the top soul and R&B acts of the day. That included 19-year-old Stevie Wonder, the 5th Dimension, Nina Simone, Sly and the Family Stone, BB King, David Ruffin, Gladys Knight and the Pips, and a remarkable duet by Mahalia Jackson and Mavis Staples. The footage sat in a basement for 50 years until Ahmir “Questlove” Thompson (drummer/leader of The Roots, house band for Jimmy Fallon’s “Tonight Show”) found and compiled it into the “Summer Of Soul.” He also added footage of contemporaneous events and tracked down some attendees to talk about what being at the event meant to them. “Summer Of Soul” is a raucous, fun, energetic record of an important American cultural moment that most of us didn’t even know happened. I was happy for the history lesson and thrilled to see these brilliant bands and singers resurrected 52 years later. 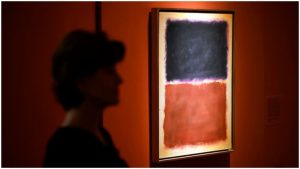 #2: “Made You Look: A True Story About Fake Art” I still don’t understand art, but have been fascinated with the way it’s seemingly overvalued by collectors who pay tens of millions of dollars for individual pieces. “Made You Look” undercuts those ridiculous valuations by exposing a fake art scandal that played out at a major gallery in the New York in the 1990s. The woman who ran the gallery, a supposed expert, bought several pieces by Mark Rothko, Jackson Pollack, and dozens of other big abstract art names, then sold them (with huge markups) at auction. When all was said and done, some $80 million had been paid for the worthless canvasses, which were revealed to be forgeries. Remarkably, director Barry Avrich managed to get all the principles to tell their stories on camera, which he then weaved into a really compelling story. 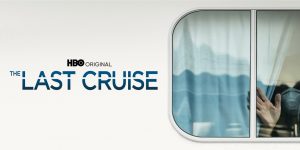 #3: “The Last Cruise” “The Last Cruise” details the sad story of the Diamond Princess, a cruise ship that departed Yokohama, Japan, on January 20, 2020 — the same day the World Health Organization revealed the first cases of COVID-19 in Wuhan, China. Unfortunately, the virus was on board and, over the course of the next 40 days, spread to more than 700 people on the ship. Passengers were quarantined in their rooms, but staff members had to continue doing their jobs while also sharing close quarters in their bunks. What makes “The Last Cruise” fascinating is that it’s told entirely from the perspective of the people stuck on that floating petri dish who recorded the goings-on with their cell phones. Director Hannah Olson did a remarkable job of culling all that video and editing it into a riveting story of a nightmare at sea. 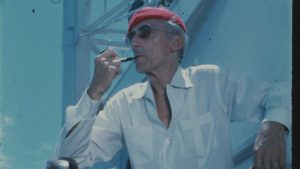 #4: “Becoming Cousteau” That would be Jacques Cousteau, the filmmaker and adventurer who introduced a generation of viewers to life under the water. His specials gave 100 million people worldwide their first up-close look at sharks and other marine animals and reefs. He was also an inventor, one of the three men who developed the aqualung, modifying existing technology in the late 1930s and early 1940s to come up with an underwater breathing device with air tanks on the back — the precursor to scuba gear. “Becoming Cousteau” captures the essence of his life, both personal and professional, and serves as a reminder of how important he was in opening the eyes of millions to a world very few got to see up close. It includes plenty of footage from Cousteau’s projects, some unseen until now, as well as excerpts from his journals and articles. 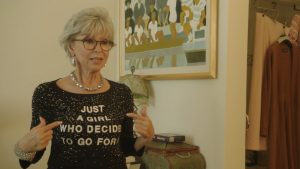 #5: “Rita Moreno: Just A Girl Who Decided To Go For It” She has always been an impressive performer, which is how she’s become an EGOT — a winner of Emmy, Grammy, Oscar, and Tony awards. But this documentary about her life explains that her path to success wasn’t easy. In it, she reveals the difficulty of moving from Puerto Rico to New York as a teenager, then dropping out of high school to move to Hollywood, where she signed a contract with MGM. Unfortunately, that led to years of being treated as a sex object by studio heads and other powerful men. Still, she compiled a career with lot of impressive credits: as Anita in the original film version of “West Side Story”; on the PBS show “The Electric Company”; and on a reboot of “One Day At A Time.” Her story is so captivating, and she’s so good at telling it, it was an absolute pleasure to spend 90 minutes hearing her walk us through it. 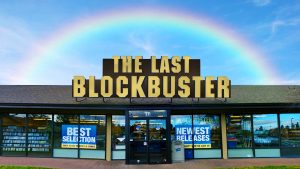 #6: “The Last Blockbuster” A documentary about the sole remaining Blockbuster video rental store, located in Bend, Oregon. It recaps the history of how Blockbuster, which at one time had hundreds of franchises, revolutionized the home entertainment business. Of course, all that success dissolved with the birth of streaming services like Netflix (which Blockbuster stupidly opted not to buy). Celebrities like Kevin Smith, Ione Skye, Brian Posehn, and Doug Benson appear in the movie to discuss their memories as Blockbuster customers, and some of them even made the trek to Oregon to visit the last store standing. But the star of “The Last Blockbuster” is Sandi Harding, the woman who’s managed that store for years — and whose entire family has worked there at some point. Not only has she kept it alive, but she’s also handled the onslaught of media requests that continue to come in from reporters who want to share the store’s unique story.

#7: “Hysterical” This is a documentary about female comedians, from pioneers such as Jean Carroll, Phyllis Diller, Moms Mabley, and Joan Rivers to contemporary stars like Iliza Shlesinger, Nikki Glaser, Rachel Feinstein, and Marina Franklin. Director Andrea Nevins got many of them to open up about what it was like to break into an area of show business traditionally dominated by men, how club bookers still won’t put two women on stage in a row, and the difficulties (and dangers) of being a road comic traveling alone. There’s also plenty of footage of their stage performances, some of it really funny. My only complaint about “Hysterical” is that it doesn’t include nearly enough of (and no interviews with) two of the best comics of the modern era — Paula Poundstone and Elayne Boosler. 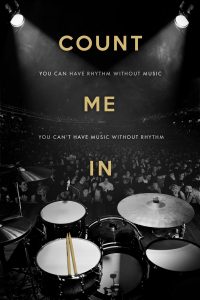 #8: “Count Me In” For this documentary, director Mark Lo compiled a stellar lineup of professional drummers to talk about why and how they do what they do. The talent lineup includes Stewart Copeland (The Police), Roger Taylor (Queen), Nick Mason (Pink Floyd), Ian Paice (Deep Purple), Taylor Hawkins (Foo Fighters), Emily Dolan Davies (Bryan Ferry), Nicko McBrain (Iron Maiden), Chad Smith (Red Hot Chili Peppers), Nick Headon (The Clash), and Cindy Blackman Santana (who has worked with her husband Carlos as well as Lenny Kravitz). What amused me throughout is that all of them love to imitate the sounds of their drums and cymbals with their mouths, so when they talk about the beat in some song, they recreate it orally. Despite ending with the inevitable drum jam session (four solos back-to-back in the same room), I enjoyed the hell out of “Count Me In,” which has the perfect title for a documentary on this subject. 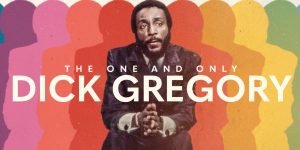 #9: “The One And Only Dick Gregory” In the early 1960s, Dick Gregory broke the mold for Black comedians. Unlike many of his predecessors, he walked onstage, sat on a stool, and told jokes about race in a way no one had before. He was so good at it he was a hit in front of both Black and white audiences, to the point where he became one of the top-earning entertainers in the country. In addition to his tour dates, he made regular appearances on TV talk shows hosted by Jack Paar, Merv Griffin, and David Frost. Then Gregory was moved by civil rights leaders who implored him to go to Mississippi and help with voter registration drives. That meant giving up paying gigs to speak to crowds of protestors and marching with them, facing the very real danger of racist cops who not only arrested but beat him, too. At one point, he was shot, but lived to talk about it on many of those same TV shows — particularly the one hosted by Merv, who booked Gregory when others wouldn’t. Gregory is still revered by many of the comics who followed in his footsteps, who happily explain why he deserves their admiration. “The One And Only Dick Gregory” serves as a good primer on one of the most influential comedians and activists of his era. 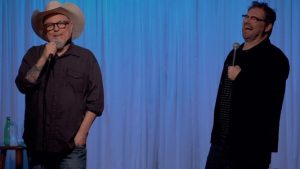 #10: “Joy Ride” What happens when you take two clever comedians, each with a successful solo career, and put them on stage together? In the case of Bobcat Goldthwait and Dana Gould, you get 70 minutes of funny, compelling content. “Joy Ride” is a chronicle of Goldthwait and Gould doing a tour of comedy clubs in the southeast — a venture that almost ended early on when they were involved in a near-fatal car crash. As a fan of both comedians, I enjoyed the ride quite a bit. They are both compelling storytellers, each with a comic’s eye for the absurd and a willingness to push boundaries, whether it’s Gould’s routine about a Ku Klux Klan member’s questions about costuming or Goldthwait’s story of being aboard a nosediving airplane with some Special Olympics kids. “Joy Ride” is much looser than the Steve Coogan/Rob Brydon “The Trip” movies and includes zero Michael Caine impressions. But having enjoyed both Goldthwait and Gould performing in person, I found it not only true to their personas, but also a lot of fun.