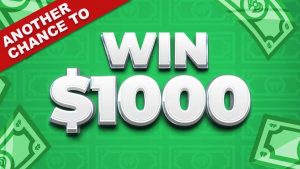 Yesterday afternoon on an iHeartRadio station, I heard a promo for the $1,000-an-hour giveaway the company has run for years on all its outlets. It’s a national contest, so when a winner is announced, it’s not necessarily in the local market — in fact, it’s pretty unlikely. Most listeners don’t know that, because the lucky person’s location is never mentioned.

In the promo I heard, the woman who won was getting pretty emotional, saying how she really needs the money. Then she said, “I’ve been trying to win this game for two years!!”

That’s when I shook my head.

When a radio station runs a contest, it should never give the impression that it’s hard to win. Everyone should feel like they have a really good chance of being caller number nine, or spelling Adele’s last name correctly, or naming two of the three guys Jennifer Lopez has married. In all the years I did the Harris Challenge on my shows, the most important element I kept in mind was making sure it was fun for listeners — even those who never called in, but played along in their cars.

What’s fun about the iHeartRadio promotion? Yes, it sounds like their stations have a big contest budget (despite the company still be mired deep in debt), but the winners are inevitably what we used to call Contest Pigs. Those are people who punch around to different stations in the hope they’ll catch a giveaway announcement and be able to call quickly enough to grab whatever the prize is. They don’t care what they win, and aren’t loyal listeners of any station in particular. iHeart makes it too easy for them by announcing its $1,000 will be up for grabs at twenty minutes after each hour.

So, no element of surprise, no likelihood of hearing someone you know winning, and the impression that you have to play every day for two years before you get the grand. What’s fun about that?