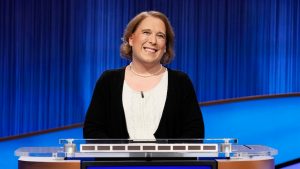 One of the first thoughts I had after it happened was, “I don’t have to come up with any more anecdotes.” — Amy Schneider, after her 40-game “Jeopardy!” win streak ended tonight

Amy is one of the show’s greatest champions, deserving of nothing but praise. And don’t start with the “she lost on purpose” garbage! That wasn’t true of James Holzhauer or Matt Amodio, and it’s doesn’t apply to her, either.

With 40 consecutive victories and $1.38 million in winnings, she’s in fourth place on the “Jeopardy!” prize list and second on the longest run chart. Ken Jennings is still atop both records, with $2.5 million and 74 shows (not counting the GOAT tournament, which won him another million).

Speaking of Ken, on tonight’s episode, he did a great job building up the tension, as a great sportscaster does. It was yet more proof that he’s the only sensible choice to host the show full-time. He’s a complete natural, offering extra information and context for some responses, a friendly demeanor, and the ability to recognize the game’s inherent drama under the right circumstances.

Tonight, after another contestant by the name of Rhone Talsma went all in on a Daily Double and answered it correctly, Ken took note of the fact that the game was suddenly closer than it had been in a long time. In other words, Amy wasn’t running away with it, as Rhone’s total was more than half of hers, setting up a Final Jeopardy where he could win.

Sure enough, that’s exactly what happened. In the category Countries of the World, the Final Jeopardy clue was, “The only nation in the world whose name in English ends in a ‘h,’ it’s also one of the 10 most populous.” When the contestant’s responses were revealed, Rhone’s screen read, “What is Bangladesh?” He was right and had wagered the appropriate amount to overtake her. Amy couldn’t come up with anything. Thus, her streak came to a sudden end.

She will be back for the next Tournament Of Champions, where she will hopefully have to face Matt, in a clash of two of the show’s best-ever players. Meanwhile, Amy deserves thanks from everyone who has been entertained by her stunning showcase of knowledge — and ability to come up with more than three dozen anecdotes to share with Ken.