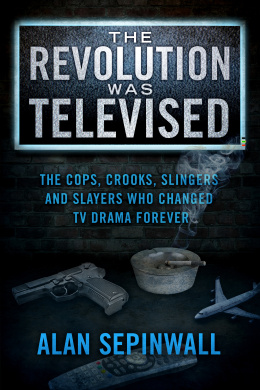 In his new book, “The Revolution Was Televised,” Alan Sepinwall (TV critic for HitFix.com) makes the case for a dozen shows that changed TV in the last decade — from “The Sopranos” to “Deadwood” to “Mad Men” to “Breaking Bad.”

I’m enjoying the book so much that I invited Alan to join me today on KTRS/St. Louis to discuss how they revolutionized the industry while appealing to smaller audiences than the previous generation’s best shows. I also asked him to explain the origin of “Lost,” the unique shooting style of “Friday Night Lights,” and why so many great shows had final episodes that made their fans mad (from “St. Elsewhere” to “Seinfeld” to “The Sopranos“). And we discussed the impact of DVDs and streaming video via Netflix, social media and blogs giving showrunners immediate feedback, and how TV has surpassed movies as a vehicle for creative storytellers.

Click here to order your copy of “The Revolution Was Televised: The Cops, Crooks, Slingers, and Slayers Who Changes TV Drama Forever.”