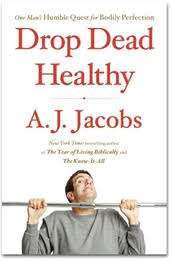 AJ Jacobs is an “experiential journalist” who commits himself to odd projects and writes about them, often hysterically.  He read the entire Encyclopedia Brittanica (when there was a print edition) from A to Z.  He lived by the strict rules of the Bible for a year.

His latest immersion experiment was to become the healthiest man alive. That meant making every part of his body better (through diet, exercise, etc.) often through extreme methods.  For instance, he tried “chewdaism,” in which you have to chew every bite of food a hundred times before swallowing.  He learned that it’s healthier to squat on the toilet than sit on it, so he did that.  For exercise, he built his own treadmill desk so he could walk and use his computer at the same time.  That’s how he produced his newest book, “Drop Dead Healthy,” which he discussed with me today on KTRS/St. Louis.