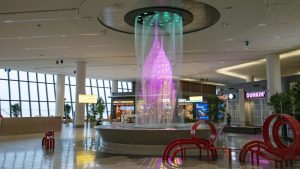 On our sojourn to New York last week, we flew in and out of LaGuardia, which I once described as the Armpit Of Airports. Eight years ago, Joe Biden referred to it as something you find in a third-world country.

But in the 2+ years since our last trip there (pre-COVID), LaGuardia has undergone a great conversion, converting the airport — at least the Southwest Airlines terminal — into a showplace. It has many more food options, plenty of bathrooms, and truly high-speed wi-fi throughout.

Even the art has been upgraded, so instead of averting my eyes as in the old days, I kept my head up and was dazzled more than once — especially by a waterfall with iconic NYC images projected on it. In addition, there’s lots more space at the check-in and baggage-check areas. And the old LaGuardia’s ubiquitous aroma — a disgusting odor somewhere between stale urine and rotting rat — is nowhere to be sniffed. Kudos to the architects and the union contractors who did a remarkable job.

The week before, on our way to and from Utah and New Mexico, we flew through Denver’s gigantic airport via United.

We were surprised not to be on larger aircraft. In both cases, we were on regional United Express jets — the kind where the rows have a single seat on the left and two seats on the right. Then, we were on even smaller planes from Denver to Grand Junction and from Santa Fe to Denver. I joked to my wife that if the trips were any longer, we’d end up on hang gliders.

In each instance, there wasn’t enough headroom for me to stand all the way up. One of them had no overhead storage for any item larger than a roll of mints. Practically all the luggage — which we usually carry on — had to be gate-checked.

While the planes were small, Denver’s airport is much larger than I remembered. How big? Our first flight landed at gate A85 and our second took off from gate B93. United’s app warns you how long a walk that is: thirty to thirty-five minutes!

Not counting bathroom stops for our sherpa, of course.

Speaking of tiny, the airport in Santa Fe is so small it only has one gate. To get there, you drive down a road right out of “The Andromeda Strain.” I was surprised we weren’t enlisted to help twist the plane’s rubber band.

When we went to return our rental car to Hertz, all four of its allocated spaces were full. With nowhere else to leave the vehicle, I just parked nearby. No Hertz employee was there to check us in, so I gave the keys to a guy at the counter inside — who may or may not have been associated with the company.

Then I watched him tell a desperate female customer that there were no cars available, but she might try Enterprise, whose office is five miles away. She looked ready to cry at the prospect of having to get there from this terminal that’s so small it doesn’t even have a taxi stand. I wanted to help by giving her the keys to the vehicle I’d just returned, but the agent wouldn’t allow it, saying it was already reserved for someone else.

I think a United employee needed it to go get a few more gallons of jet fuel for our flight.